Home Swim Do You Need a Wetsuit?
Swim

Do You Need a Wetsuit? 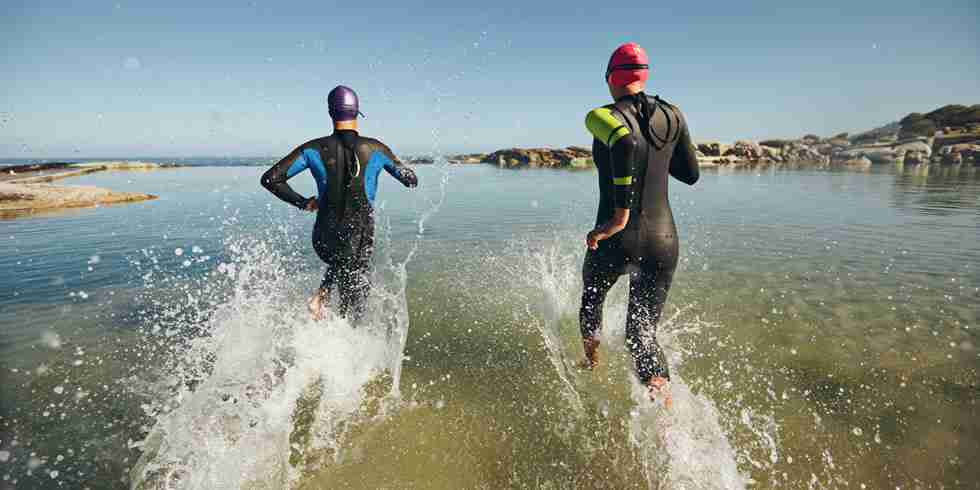 When did we start wearing wetsuits in Triathlon?

In the early-to-mid 1990’s, the use of the wetsuit emerged as a source of controversy in the sport of triathlon.  Originally, the wetsuit was introduced to the sport as a safety tool to help the triathlete survive cold waters and prevent hypothermia during the swimming portion of a race.

When a swimmer is submerged in water, the water flows into the suit settling between the rubber and the body.  Initially, the natural temperature of the body will warm the entrapped water.  As the triathlete begins to swim, the body temperature rises, causing the temperature of the water inside the suit to rise as well.  Thus, the increased water temperature keeps the swimmer warm during the event. However, it wasn’t long before triathletes discovered the wetsuit served an even greater purpose in triathlon…

That’s right.  It was quickly discovered that the wetsuit provided the necessary buoyancy to lift a swimmer high enough in the water to enhance the overall swim performance. The theory being, the higher you are in the water, the less water resistance when swimming and the faster the overall swim performance…much like that of a speed boat traveling on a plane.  Needless to say, controversy arose and the tri-politicians got involved.

Were the wetsuits being worn to protect against the colder waters or were triathletes simply using the wetsuit as a tool to gain a competitive edge in the water thus improving their overall triathlon performance?

The wetsuit was being worn as a cold water preventative and as a means of gaining that competitive edge.  But, despite the performance advantages resulting from the wetsuit, the safety of the swimmer came first and the issue seemed settled.

That is until the sport of triathlon began to grow and wetsuits were being worn by triathletes in all types of waters, warm as well as cold.  Obviously, speed became the motivating factor behind the wearing of wetsuits as capitalism and free enterprise inevitably entered the picture.  Manufacturers got involved and the race for the lightest, tightest and most maneuverable wetsuit was underway.

To combat the growing popularity of the wetsuit and its newfound place in the sport of triathlon, tri-officials voted in a temperature ceiling.  In other words, it was decided that the temperature of the water prior to the race start would be the determining factor as to whether wetsuits could be worn.  However, it seemed the powers-that-be could not decide on a temperature suitable for the majority.  One day it was 72? the next it was 78? and the flip flop continued.

To keep up with the changing rules, wetsuit makers developed a variety of styles to match the conditions of the water.  The Springsuit, sleeveless and cut above the knee, was designed for warmer waters, while still providing the necessary buoyancy.

The Longjohns, sleeveless but full length, provided warmth and ease of arm mobility.

Finally, Fullsuit included the sleeves and was designed to provide maximum warmth.  All three are still used today, but the controversy seems to have died out.

When choosing a wetsuit, so much depends upon your geographic location and the conditions or the water in which you will be swimming.   For races in colder waters, i.e. Escape From Alcatraz,  Ironman Canada, a full suit should be worn.  Just remember in warmer waters wearing a wetsuit can still leave you dehydrated. So make sure you drink, drink, drink, once on the bike.

The Conclusion about Wetsuits

Go Ahead and Get One!

I remember when I first entered this sport, while living in the southeast where water temperatures reach the mid to high 80’s, and thinking anyone who wore a wetsuit in a triathlon was silly.  Then I was informed that they actually make you swim faster because of the buoyancy.

Well, that confirmed it. I was a swimmer by-golly and there was no way I would ever use such a prop to improve my swimming.

I didn’t need one!

That is until I feasted on a nice healthy portion of humble pie during the swim portion of my second-ever triathlon.  One of the athletes (kind of a jerk and one helluva a traithlete!) of whom I typically enjoyed blowing out of water during swim practice…was right on my tail during the swim!!!  And climbed out of the water right behind me.   Needless to say I was somewhat displeased.  Consequently, that next Monday, I was on the phone ordering my new rubber body suit. And I will never go back.

Now I tell my swimming buddies who suffer from the same ego problem I did in the beginning, “buy the damn wetsuit, it will make you swim even faster!”.

Regardless of the advantages a wetsuit provides, it has also allowed many a non-swimmer to enter this wonderful sport, and remain.  It may have even saved some lives during those traditional, frothy mass starts!  And really, that is what is most important.

Buy a wetsuit and enjoy!  It will be one of the best investments you will make.

As a former All-American swimmer, Hazen has spent many years as a competitive triathlete and coach of both triathletes and swimmers.

How to Use Swimming Drills to Improve Your...

Improve Your Swim by Determining Your Aerobic Swimming...

How to Train for the Swim Portion of...

This website uses cookies to improve your experience. We'll assume you're ok with this, but you can opt-out if you wish. Accept Read More